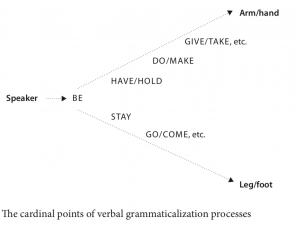 SBC’s in grammar take their source in the human body, with verbs that denote ‘be’ as a departure point for the arm/hand- and the leg/foot-string.

These two strings do not only represent a great departure point for e.g. empty verb constructions or transitive copulas or temporal auxiliaries, but, in general, many of the verbs that tend to go down the grammaticalization path appear in one of these two strings.

‘Be’ can be regarded as the source or point of departure for all further developments.

It makes a difference concerning the choice of the prototype whether the functional domains of ‘be’ and ‘have’ are still clearly distinct (as in English, German, French, or Italian) or overlap (as in e.g. Japanese).

Starting with ‘be’ (which only states the existence of the body), there are mainly two strings that tend to be exploited for grammaticalization: the arm/hand-string and the leg/foot-string.

SBC’s include static verbs such as ‘have’, ‘hold’, ‘stay’ (e.g. Spanish estar and Italian stare), and ‘rest’ (e.g. Spanish quedar), as well as verbs implying an action with a more or less visible movement, such as ‘make’, ‘do’, ‘go’, ‘come’ etc., with (potential) further empty verbs belonging to the group of directed movements verbs such as ‘give’, ‘take’, ‘return’ (e.g. Spanish volver) etc.

Therefore, it is important to note that the two-string-model is an idealistic model and that not all steps have to be taken in a certain language.

In Spanish and Portuguese, for example, the verbs tener/ter (‘hold’) are very strong and have already replaced ‘have’ in many areas in Spanish (tengo miedo, hambre vs. la chica ha perdido el dinero), and even completely as an auxiliary in Portuguese (ter).

In French and Italian, on the contrary, faire/fare (‘make/do’) appear in more empty verb constructions than tenir/tenere (‘hold’).

This has probably to do with the fact that in these two languages the auxiliary section is divided between ‘be’ and ‘have’ and that therefore the meaning of ‘have’ is still strong and does not have to be emphasized with ‘hold’.

This favors the rise of verbs further away from ‘have’.

In the case of Spanish, ‘have’ has taken over the function of ‘be’ as an auxiliary.

By doing so, the verb ‘have’ has lost some of its semantic content.

This semantic bleaching opened the door for a more concrete form ‘hold’.

Similar developments can be seen in different languages.

From a diachronic perspective it is also interesting to note that the developments of empty verbs + abstract nouns take place in one string (Latin fames mihi est [BE] > famem habeo [HAVE] > Spanish tengo hambre [HOLD]).

Constructions such as empty verb/auxiliary + verb can also take place in between the two strings with a slight semantic change involved and a synchronically double presence of the two forms (Latin cantare habemus [HAVE] > chanterons vs. allons [GO] chanter).

The reason for the overlapping of the two strings might be that the older (synthesized) form turned opaque and therefore the speaker does not associate the form with a particular string any more.