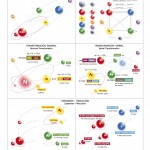 The project focuses on the mental representations of grammar. Given the fact that the dynamic processes inherent to grammatical reanalysis cannot be made visible in FMRI, at least at this technical stage, we have chosen to illustrate the transformation processes which take place on the syntactic level, by starting out with a static representation of the main players and developing from there a dynamic computer animated model in order to display different reanalyzing processes on the syntactic level, such as relation, transformation and substitution. The following graphic represents the main word classes, such as nouns (N), verbs (V), adjectives (Aj), adverbs (Av), articles (ar), prepositions (pp), pronouns (pn) and subordinate conjunctions (sk):

The different existing dynamic processes in between the entities are marked with different lines and fleshes such as ”—” (relation), ”–> ” (substitution) and a solid flesh for transfor- mation processes, such as in graphic 3:

Graphic 3 illustrates that the conglomeration of a preposition (pp) and a noun (N) can lead to at least two new interpretations of the underlying functional structure (deep structure). In a sentence such as Pierre est sûr de l’amour de Marie the construction ”de Marie” (surface structure: pp N) can be regarded from a functional point of view as an adjective (Aj) and in a sentences such as Marie fait ses études à Paris, ”à Paris” or in other words the same surface structure (pp N) fulfills the function of an adverb of location (Av).

The aim of this project is to present a computer animated dynamic model which allows not only to group the results of different reanalyzing processes, but also to set up ways to visualize the functional distances between near synonymical constructions in one language. Furthermore, from a cognitive perspective, it will be highlighted that different surface structure patterns in French, Spanish, English and German, are based on similar deep structure phenomena. The results of this visualization model of grammatical reanalyzing processes can have an important impact on the way sentences will be structured and chosen in future FMRI experiments as the transformation tool shows that the surface structure only reflects inadequately the hierarchical structures and functions of the cognitive deep structure (e.g an adjective doesn’t have to be in adjectival function in a construction and the assumption of ”word class = function” may lead to incorrect interpretations in neurological experiments).